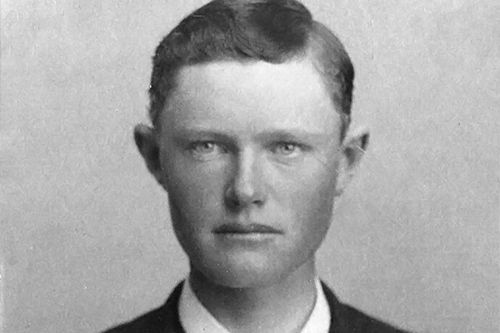 The Killing of Coral Hickman

If you happen to be heading east out of Eads on Highway 287, you'll soon notice a dog leg in the road heading south just before the turn-off to Highway 96. That bend in the road is roughly three miles from town, prompting the name “three mile turn” which locals use to describe the spot.

But older residents who have lived in the area for, say, fifty years or more call that turn “Hickman Hill”. It's a good name for that turn, and there's a good reason behind it. What follows is the story that explains it all.

Just before noon on an unusually cold and dry March 14, 1930, three men walked into the Manter Bank in Manter, Kansas. Manter was a new and booming town in far southwestern Kansas, and the three anticipated the bank would be heavy with deposits. Several minutes later, while brandishing “rifles, shotguns and six-shooters,” John Walker, Andrew Halliday, and Clyde “Shorty” Ray, came back out of the bank with roughly $4000 in cash. They then got into a Model A Ford and started up the engine.

The three men had done this before. Walker, 41 and from Joplin, as well as Halliday, 24, and Ray, 22, both of Webb City, Missouri, reportedly had known each other for much of their lives. If, as the car was thrown into gear, their decision had been to head east, the three men might have lived lives that turned out differently. But they didn't head east. They headed west, toward Colorado. And, in so doing, they sealed their fate.

Several hours and 120 miles to the northwest, the phone rang in the office of Sheriff Mayne in Eads, Colorado. Kansas authorities were on the line, and the message was simple and short. Three “bandits” were speeding their way.

Deputy Sheriff Coral Hickman was notified and, calling to W. Mosher to join him, jumped into his Durant Coupe and headed southeast, looking to spot the Model A coming toward town. If the call had come just a few minutes later or if Hickman had been delayed in getting into his car, his life might have turned out differently, as well. But those things didn't happen. Hickman and Mosher had driven about five miles when Hickman spotted the light sedan with three men inside speeding past him. He immediately swung his car around and gave chase, quickly overtaking the car which was “running at a high rate of speed”.

Coral Hickman was tall, lean, sported a thick, black mustache and came from one of the more prominent families in Kiowa County. The Hickmans, originally of Wayne County, Iowa, had come to Colorado in 1886 and homesteaded north of Chivington, ultimately building one of the more successful cattle ranches in the area.

Byard Hickman, Coral's father, had been one of Kiowa County's first commissioners and allegedly took part in the raid that stole the county seat from Sheridan Lake. Coral's younger sister, Ziza, had built the highly successful and fashionable Rialto Hotel in Eads. She had then died, six years later and six weeks after her husband had passed away.

Coral, the seventh of nine children and the youngest boy, had spent much of his childhood and adult life cowboying in the company of his two older brothers, Anderson and Ed, who were 18 and 13 years older, respectively. Along with a number of other cowboys, Hickman met Teddy Roosevelt when he came through southeastern Colorado in 1903. Hickman had turned 51 years old just 10 days earlier and reportedly spent his birthday at home on his ranch and in the company of Mamie, his wife of 23 years, and his three children, Neva, 21, Earl, 22 and Cecil, 12. By a number of accounts, Hickman was a quiet, serious man and had been a deputy sheriff for close to a decade.

Two miles east of town, the trio, seeing that they would either be captured or have to fight it out, slammed their car to a stop and jumped out, firing their guns at Hickman's car. Hickman jumped from his car and returned fire, facing the three men head on and walking toward them as he shot. A number of gunshots were exchanged and, according to Mosher who witnessed the incident, Hickman had almost made it to the gunmen when two bullets entered his chest, dropping him to the ground. What followed contributed to the ferocity with which the three men were hated by townspeople and officers alike.

While Hickman was on the ground, Ray, the youngest of the three, shot him four more times, the last bullet piercing his brain. According to one account that cannot be verified, Walker spotted Mosher, who was unarmed, watching some distance away. He allegedly told Mosher that Ray was going to see him standing there and shoot him, too, if he didn't run. Mosher supposedly took off running and was shot by Ray in the leg. After taking Hickman's gun, the three men then climbed back in the Model A and drove off, leaving Hickman lying face down in the road.

The Manter bandits, as they were soon named, continued northwest but got lost on the winding farm roads. Somewhere around Wild Horse, they stopped two twelve year old boys on horseback and asked how to get “on the road to Kit Carson”. The boys, not knowing they were talking to bank robbers, gave directions, warning them to “watch out for the turn in the road”. Evidently, their warning was ignored since tracking the men revealed a place where they missed a turn, crashed through a fence and drove through a pasture before returning to the road.

Ed Hickman, Coral's older brother, was on his way to a sheriff's sale in Chivington when he came up on the scene. He immediately ran to the body in the road, not realizing it was his younger brother until he turned him over. Ed later testified that Coral, who was dying, then uttered his last words. “I faced 'em, Ed,” Coral said. “I faced 'em.”

Ed then ran to the Kiowa County Press where Earl, Coral's son, was working. “Earl,” he was reported to have said, “I have the saddest news you will ever hear. Your father is dead. Those bandits shot him to pieces!”

Before long, a local operator had notified all other towns in the area. A large posse was formed, including seven airplanes to aid in the search. The three men were now outside of Cheyenne Wells where they exchanged shots with three more deputies, injuring all three. At that point, the bandits headed back toward Kansas.

Over the next 26 hours, the men stole at least one more car and even fled on foot while a search of massive proportions ensued. More than 200 armed men scoured the area; airplanes flew overhead (although one plane with the Lamar DA aboard got lost and ended up in Baca County), bloodhounds were brought in and the National Guard, stationed in nearby Burlington, was mobilized. The troops were preparing to leave when news came that the bandits had been captured in an abandoned shack south of Jetmore, Kansas.

As the story goes, the men woke up, discovered they were surrounded by several hundred armed “citizen possemen” and surrendered. During the arrest, it was discovered that Walker was wounded in the leg, and his head had been grazed by a bullet. The bandits were taken to Johnson County jail where they protested their innocence, although they were identified by two witnesses from the bank.

Upon hearing that the men had been captured, Colorado officials announced plans to extradite the robbers to Colorado where they would stand trial for murder, a crime punishable by death, unlike in Kansas where the maximum sentence was life in prison with no chance of parole. Kansas authorities wasted no time in turning the robbers over.

First degree murder charges were filed in Eads two days later. Under the cloak of darkness and with prisoners in tow, Colorado police left Eads at 9pm that night and took a secret route for the Denver jail, certain that, had they been discovered on the road with the men, a mob would have formed, and the prisoners would have been lynched.

In the weeks that followed, the story was covered all across the nation. Articles showed up in newspapers in California, Wisconsin, New York, Michigan and a number of other states, including all those adjacent to Colorado. Tangential stories continued to make the news, as well, including a report from Missouri where three “bandit ladies” were arrested by police after it was discovered they were driving Ray's car. Mrs. Sadie Walker--wife of John Walker, Goldie Hegworth—girlfriend of Andrew Halliday, and “Brownie” McClain were detained by police for several days under suspicion of aiding and abetting in the robbery. But the women “remained tightlipped” and were eventually released.

After being brought to Denver, Clyde Ray confessed, claiming to be the only one who shot Deputy Hickman. But additional questioning led to Walker and Halliday contesting Ray's confession. Ray ultimately admitted that he'd confessed only to save the lives of the other two. The three men then requested to be tried as one. When asked if they understood this would bring the death penalty, Ray answered yes. “There's no point in fighting,” he said. “We have no money for an attorney, and we're tired of causing problems.”

Each man then wrote and signed a confession.

The court assigned Thomas R. Hoffmire to be defense counsel. The men were returned to Eads; a jury was selected, and on April 7th, less than a month after the crime, the trial began to a courtroom packed with standing room only.

Hoffmire, determined to give the best defense he could, announced the defendants would plead not guilty and moved from the outset that their confessions be turned over to defense counsel to read. Phelps objected. The judge sustained and said that would only occur if the confessions were admitted as evidence. That, Phelps said, was not going to happen since he had enough witnesses to identify them as the robbers. That interchange foreshadowed how the trial was going to go for the men. Defense objected to every move the DA made; the judge overruled every objection.

On April 29th, the men were found guilty and sentenced to hang in Canon City Penitentiary on January 30, 1931.

Over the months that followed, Halliday was described as constantly in prayer. Meanwhile, Walker told his mother, 71, and two sisters that he wouldn't see them and didn't want his mother knowing he was sentenced to death. Instead, he instructed his sisters to tell their mother that he “got twenty years.” Walker then proceeded to write dozens of letters that his sisters were to mail to their mother once a month until she died.

On the morning of January 30th, the three men were led to the gallows in deference to their request to be executed together. They lined up—Walker, Halliday and then Ray—and the executioner put a noose around the neck of each man. He then put his hand on the lever, pushed forward and the floor dropped out beneath them. Unfortunately, the one thousand one hundred pound weight was not heavy enough to provide an instant death. As a result, the three men died of strangulation, a process that reportedly took several minutes.

Aside from what occurred during those ten months in '30 and '31, virtually nothing is known about John Walker, Andrew Halliday and Clyde Ray. It's almost as if, once those shots were fired, they ceased to have a past or an identity of any kind outside of the crime. And even that was extinguished once they fell from the gallows on that January morning.

Eighty-five years later, Coral Hickman is still hailed as a hero in Kiowa County. And over those same years, the three killers have morphed into one man—the Manter bandit—known only for six shots fired from a gun and 26 hours on the run.