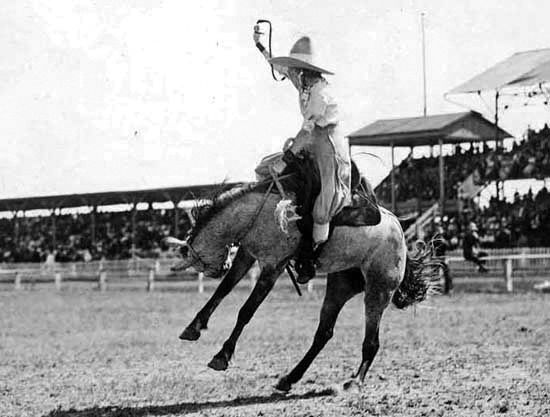 Lillian Cline Sapp: A Pioneer of a Different Sort

“Life on the frontier” was not exactly a cake walk. It was difficult, and it was dangerous. There were jobs that required the help of more people than there were people who were present to help. As a result, those who would never be granted equality to any reasonable degree in other situations soon became as equal as anyone else, simply by virtue of where they happened to be at the time. Women were no exception.

n the world of ranching and working cattle, “cowboying” was typically viewed as a man's occupation, but, in reality, many women learned to “rope and ride” and all other aspects of ranch life. They just didn't get the credit. And they certainly didn't get the paycheck, either.

In the late 19th century when Wild West shows became bigger and more popular than ever before, women were brought into the arena, but, once they were there, they were almost always limited to performing as mounted pistol shooters and trick riders. In 1885, when Buffalo Bill hired Annie Oakley for his show, the public began to have a face they could associate with female wild west performers. In 1894, she took the role one step further when she created the iconic image of the “cowgirl” in a film by Thomas Alva Edison. God love her, Annie was a real trailblazer for those who followed behind.

Then, in 1903, women began to compete in Cheyenne Frontier Days, although their numbers weren't exactly overwhelming. But 15 years later, in 1918, the first indoor rodeo was held in Fort Worth, women took an unprecedented step toward full participation in rodeo events, including “bronc busting” and “bucking horse riding”. Competitors Prairie Rose Henderson, Mabel Strickland and Bertha Blankett became names that people actually recognized.

By 1920, women were competing as relay racers, rough stock riders and trick riders, and by 1928, one third of all rodeos had women competitors.

Then, in 1929, women's participation abruptly ended after the death of bronc rider Bonnie McCarroll. She was participating in the Pendleton Round-up when her horse threw her and she was dragged around the arena by her foot, caught in the stirrup.

In the midst of this rise and fall of bronc riding women, a local gal with a spirit as big as the western sky managed to bust her way into the arena where she took her place in the lights.

On May 5, 1897, a precocious little baby was born on the Cline family ranch outside Haswell, Colorado. Her parents named her Lillian, a name that ended up being the only “feminine” thing about her. Lillian grew up on the prairie, learning to cope with the winters and the work that came with living on a ranch.

In 1911, at the age of 14, Lillian took her first step off the trail followed by every other girl her age. She and her sister had been enlisted to help with a cattle drive. Forced o wear skirts which spooked the horse she was riding when the skirts got lifted by the wind, Lillian learned early on how to stay on the back of a horse until the last possible moment.

On that day in 1911, Lillian had had enough. She'd hated the cold since she was born and hated even more the skirts she had to wear that allowed the wind to get up in her knickers. So, when no one was looking, Lillian robbed the bunk of one of the hired hands and put on his pants, his sweater and his coat. When told to go back and change clothes, she refused. She said she'd been thrown by a horse so many times for her skirt getting caught on fences, she was afraid she'd never grow any taller.

If that wasn't an indication of what was to come, it's hard to say what was.

In 1922, Lillian married Ray Sapp, and a year later they began the professional rodeo circuit. Ray, who had more experience than talent, competed in bronc busting, bull riding and roping and bulldogging steers. Lillian entered the arena a year later, competing in only one event. Bronc riding.

She was good. Really good, and the purses she won—made of cash, not fabric—proved it. Seems those years wearing skirts paid off, after all.

Lillian and Ray competed on the circuit for the next 9 years. Then, in 1932, three years after the death of Bonnie McCarroll, Lillian hung up her stirrups. It wasn't the being thrown or the travel that drove her from the ring; it was the size of the purses. The Great Depression had hit. Times were rougher than rough. And the prize money she was getting from competing in Colorado, Kansas and Oklahoma just wasn't enough to cover all the expenses involved.

Later, she was asked if she enjoyed riding the circuit. True to who she was, Lillian answered, “I liked the purses I got out of it.” And that was her only comment.

Ray retired, as well, and he and Lillian bought a business in Eads where she cooked for large groups of people. When Ray died in 1950, Lillian sold the business and moved to the Cage Ranch, north of Haswell. When the operation changed, she quit and moved to Hugo where she worked as a cook in the Lincoln County Hospital kitchen.

After she retired from the hospital, Lillian stayed on in Hugo. She died there in 1979.

Years later, when accounts of cattle ranching around Haswell in the early years began to surface, people were surprised to see frequent mention of Dave B. Cline, Lillian's father, and Lillian for their great skill in handling large groups of cattle.

As some say, Lillian finally got her comeuppance. One can only hope she knew.